The majority of the charity’s efforts have been concentrated in Syria since the war was first waged in May of 2011. 9 years of unabated war has seen thousands of homes destroyed, families displaced, civilians injured and lives lost. The ongoing war is not showing any signs of abating and currently, the death toll stands at around a million recorded deaths, but the real figure is suspected to be almost double that as bodies are constantly being retrieved from under the rubble from almost daily bombardment. In 2016, Syria’s population was 17 million and it’s estimated that 4.9 million civilians have fled the violence to neighboring countries; Jordan, Iraq, Lebanon, and Turkey. 12 million civilians are still living in a war zone without access to food, water, healthcare, and in some cases, adequate housing and it is a constant challenge finding the limited supply of food and resources amongst the snipers and bombs just to make it through another day. There are currently millions of people living in besieged areas of Syria, many are suffering from extreme starvation. MiN volunteers undergo intense efforts to reach these people; a MiN volunteer was martyred attempting to reach those in need in the besieged area.

MiN aims to provide for their basic needs in the interim, but ultimately, our aim is to rebuild their lives so that they can become self-sufficient and bring some normality and dignity back into their lives. MiN doesn’t want to just change lives; we aim to rebuild them into something better.

Purpose-built residential village dedicated to the families of martyrs from among the internally displaced people of Syria. The village is surrounded by a fence allowing it to become a it a safe gated area for orphans and widows.

The area of ​​each apartment is forty meters and consists of two rooms, a kitchen and a bathroom. The village consists of each building containing eight apartments in the first and in the second floor. To date, sixty-four apartments are currently complete which will allow sixty-four families to be rehoused in a solid secure, and safe environment. We are now working towards expanding the project forward to have one hundred and fifty apartments InshaAllah.

Future plans are to build a Quran institute for children and women, recreational grounds so families can regain some form of normality in their daily lives. This project truly a great opportunity for ongoing charity. Each apartment costs £1500 to build, a great ongoing sadaqah opportunity 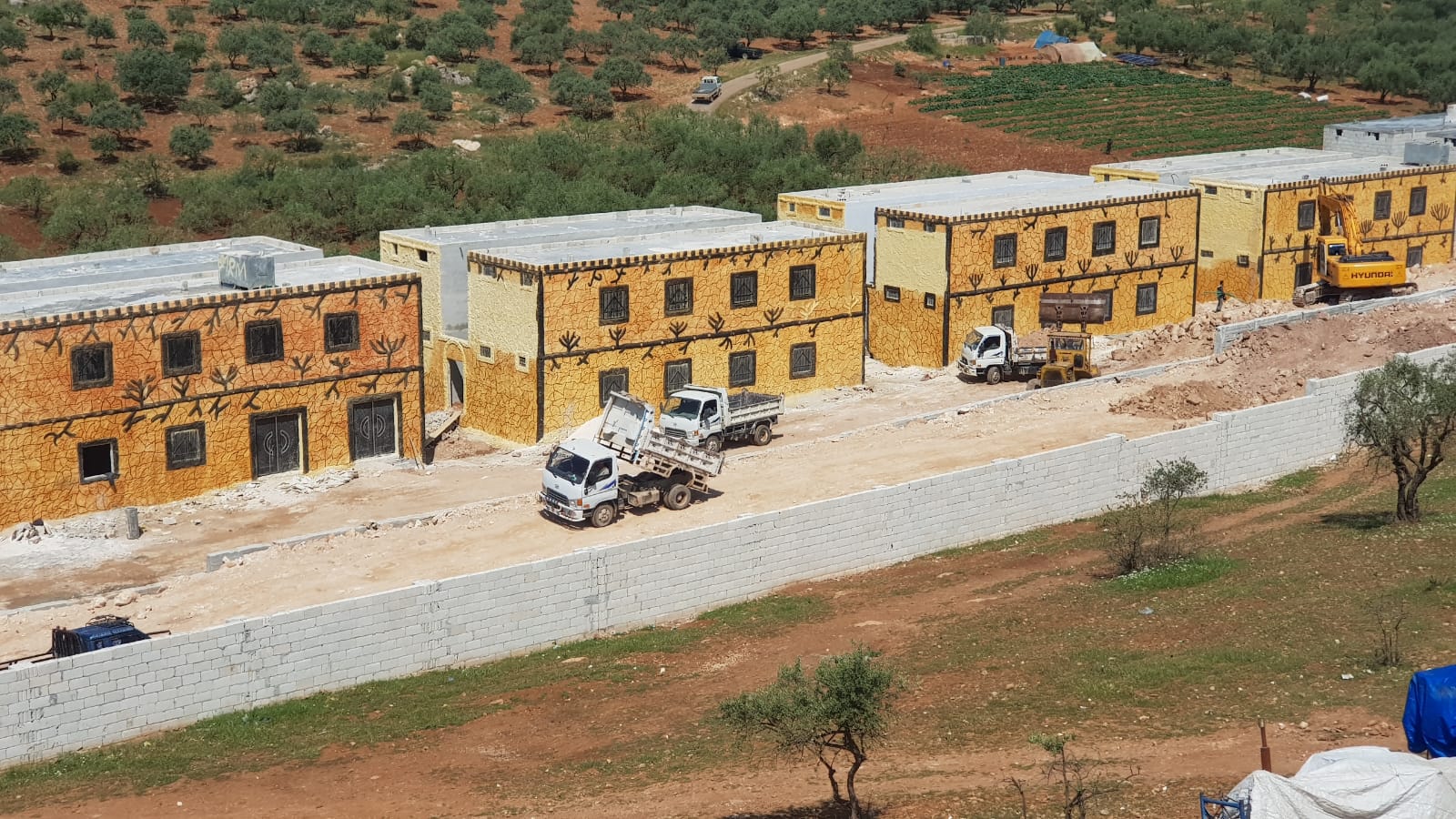 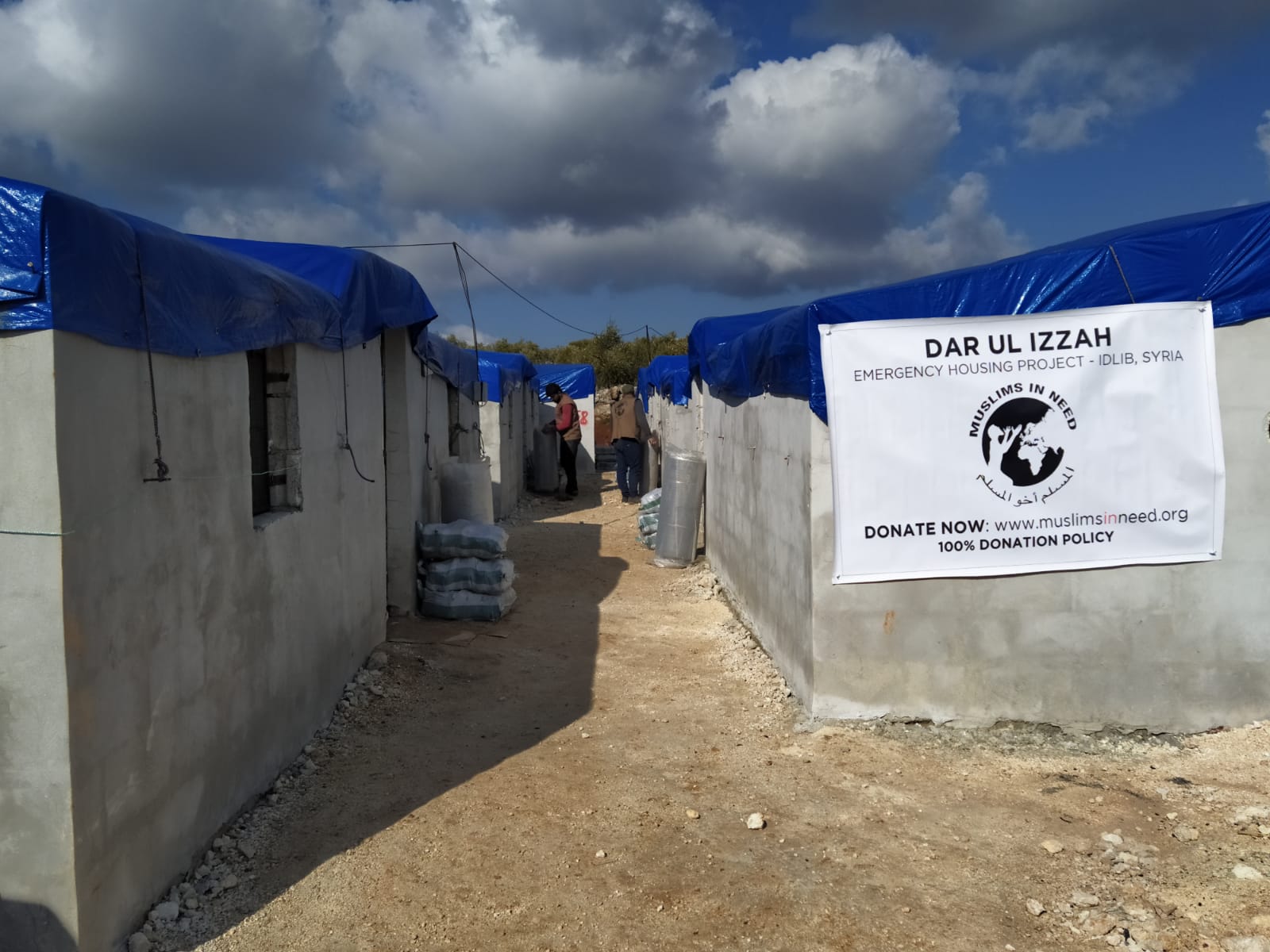 Providing housing for refugees from all across Syria, Dar Ul Izzah enables families to live in a dignified manner. It is a simple, easy-to-make and quick housing project that can be implemented in days. The area the apartment is forty square meters. It consists of two rooms, a kitchen and a bathroom. The project consists of fifty apartments in total, with room for further expansion to shelter future refugees at any given period of time inshaAllah. It is built near the town of Barisha (very close to the Turkish border) Number of project beneficiaries are fifty families with two hundred and forty people. Most of the families that were housed in the apartments are among the vulnerable families: wives of the martyrs, families that have critical conditions, disabled, elderly, and poor families. Each house costs £500 and can be constructed within days and allow families ready to move in.

Work began with the building of the mosque on 1/1/2019. It is located near Dar Al-Khair, which includes several camps that shelters many refugees from the countryside of Idlib, Hama, and Aleppo. It was completed on 01/01/2020. The interior space is estimated at two hundred and seventy square meters, one large hall with a mihrab and a minbar.

The worshipers attend the mosque from several neighboring refugee camps estimating (at the first Friday prayer) about five hundred people. The full capacity of the mosque is approximately seven hundred worshippers. The mosque is fully equipped with all electrical supplies such as audio devices, external and internal amplifiers, good furniture, and also a continuous solar power supply.

Building a Masjid with Muslims In Need is an amazing sadaqah jariyah opportunity whether it be for investing in your own ahkirah or on behlaf of a loved one. 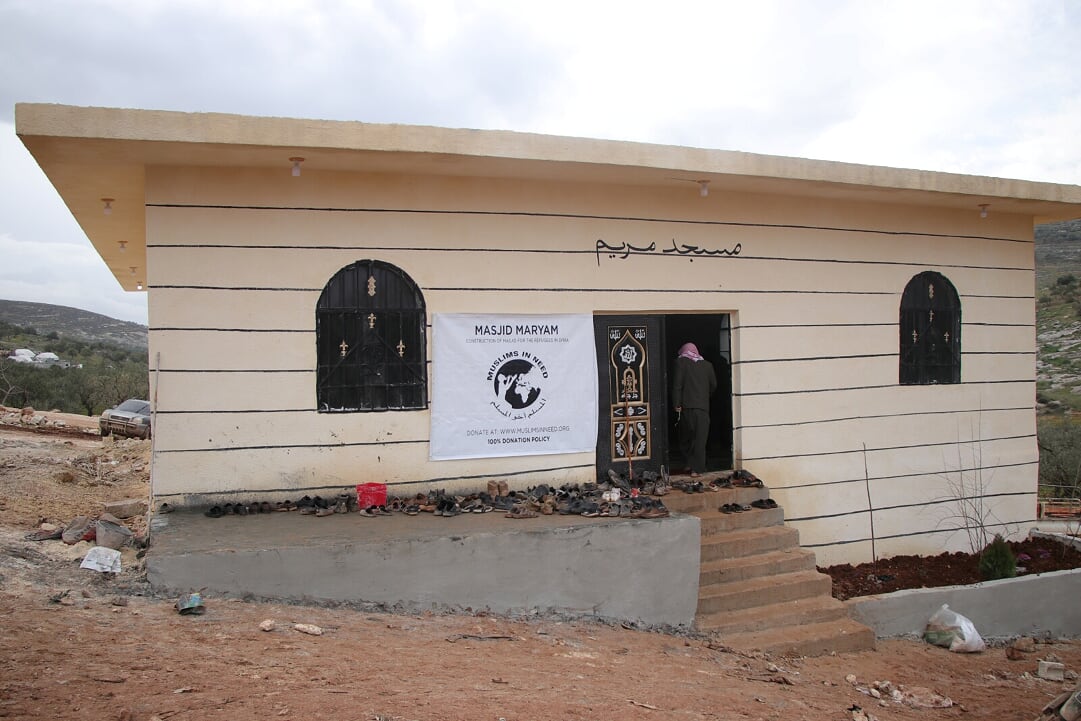 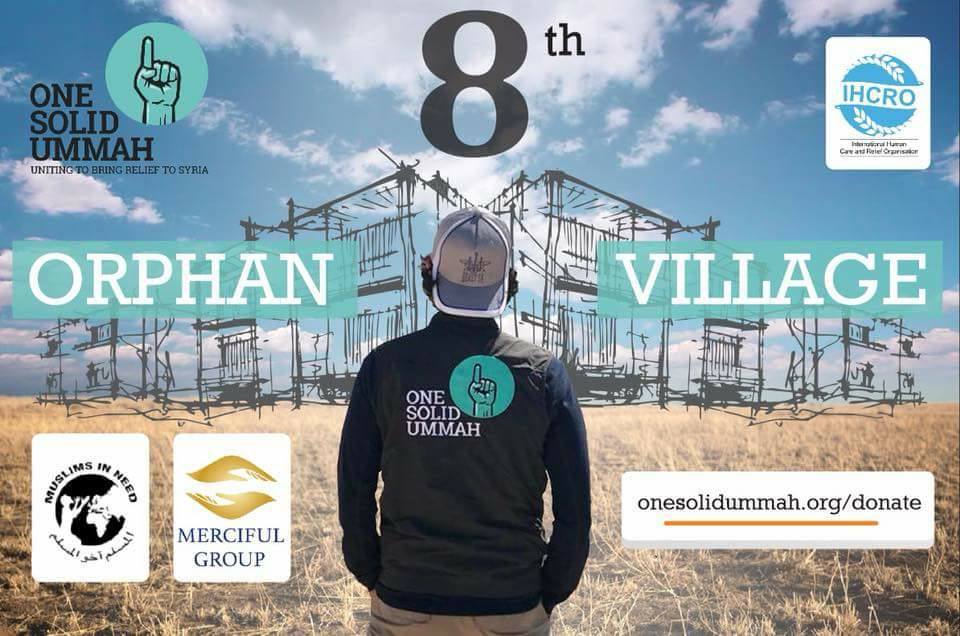 Partnering with One Solid Ummah (Syria) & Merciful Group (Australia), we’re launching our 2nd village (8th OSU Village) for hundreds of more orphans and widows. This project will take OSU’s tally to 250 homes built in past 3 years MashaAllah!! This project will include: Building 50 quality homes, all to be furnished, lovely playground, Masjid and Quran school, Deepwater well, electric generator and solar panels, recreational hall. OV 8 is situated just meters away from our orphan village 6, whereby the children will be able to attend OSU’s school in that village.

We ask everyone to get involved by donating, fundraising and sharing. As we live in comfort, let us share what Allah gave us with others. We aim to live in a world where not one child or family is ever in need InshaAllah.

Orphan Village in conjunction with One Solid Ummah

Many thought it was a pipe dream. But today, with your donations, MiN and OSU have succeeded in housing Syrian orphans in a safe, loving, caring and secure environment away from the bombs and snipers. Village 2 houses a total of 120 Syrian orphans inside Syria's Atmeh Camp. The orphans now live in a gated community with 24/7 security where all their needs are met. The village is connected to OSU Oprhan village 1 which accommodates a Masjid, school, clinic, supermarket and even a toy shop.  Children have access to these facilities every day. These children, who have been through so much can finally begin to put the past behind them and enjoy the rest of their childhood as children, not victims of war. MiN isn’t just helping to change their lives; we want to re-build them. 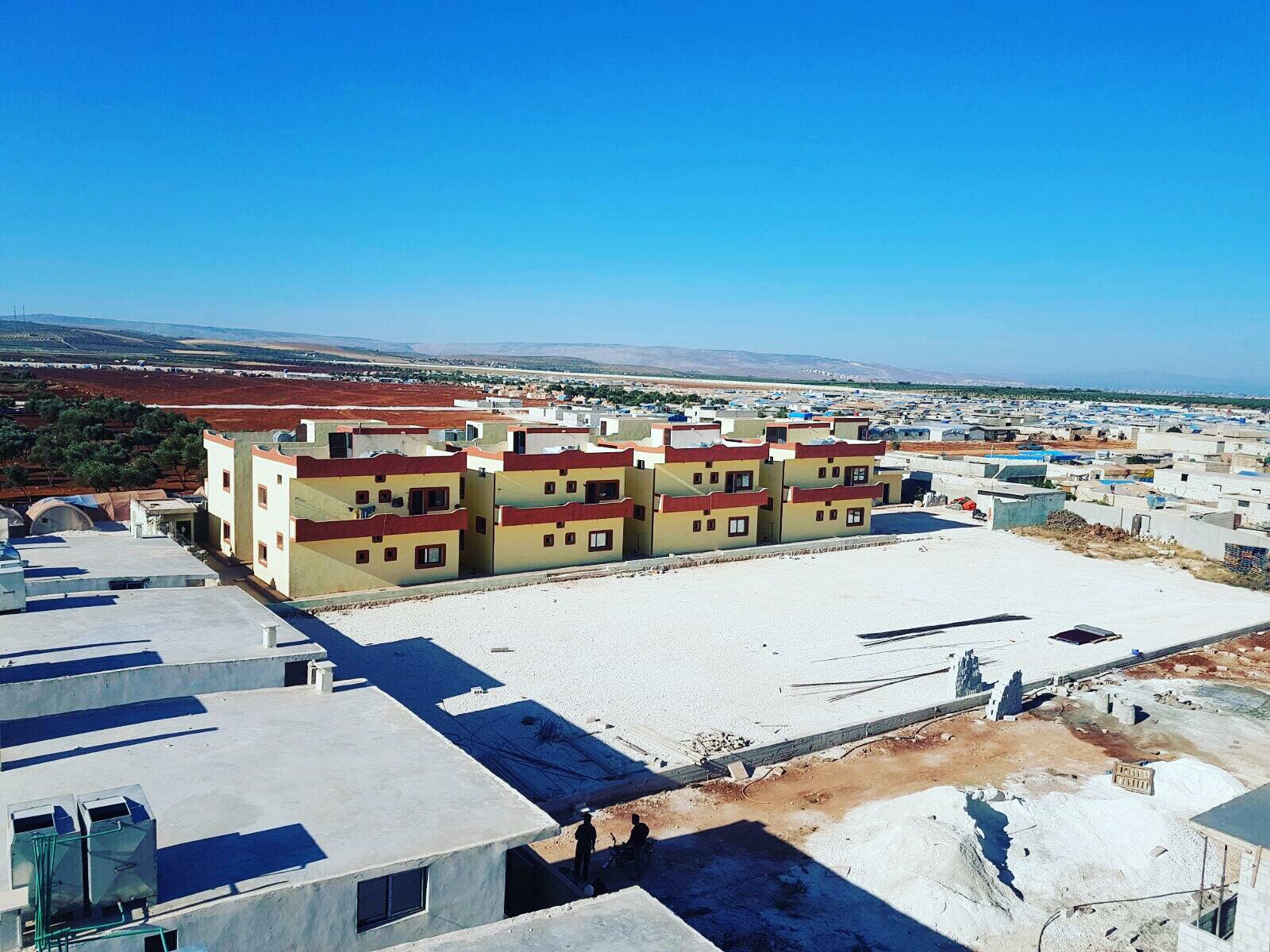 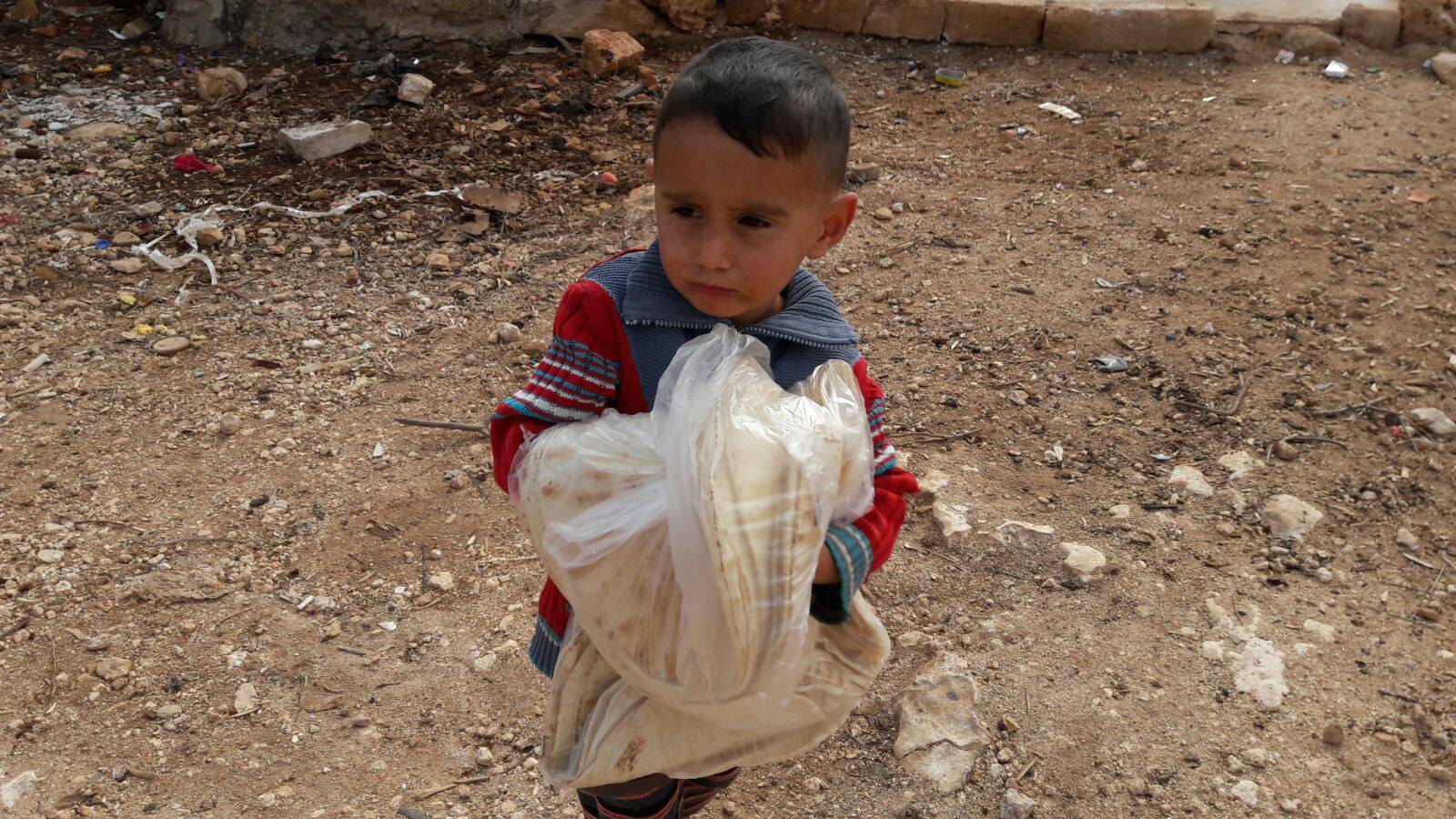 MiN supplies flour to a bread factory in Syria which provides over 100,000 people with free bread. For many, this bread factory is a lifeline and without it, thousands would go hungry, so your regular donations to keep this factory running are vital.

Muslims In Need uses your regular and one-off donations for the Bread Factory project to purchase flour in either the U.K. or from Turkey (depending on donor preference) and then this is transported to the bread factory inside Syria. The factory also provides a form of sustainable living as many Syrians are employed to run the bakery and this regular income allows them to live a self-sufficient life with dignity without having to rely on food parcels and handouts.

Cost of flour if purchased from Turkey.

There are only a handful of operational hospitals that remain in Syria and with little to no access to medical equipment and supplies, coupled with a severe shortage of doctors and other medical staff, medical help offered to victims of bomb blasts and shootings is well below sub-par. Hospitals are severely lacking basics like bandages, scalpels and tubing. MiN has worked closely with volunteers with contacts in the NHS to cost-effectively source much needed medical supplies. To date we have sent several’ containers of medical aid and amongst the aid sent, there was a complete x-ray room, a full conatiner of hospital beds and mattresses, an infant incubator, oxygenators and packets of Celox, which are vital, life-saving haemostatic ‘patches’ that can be applied to a wound to stop severe life-threatening bleeding. 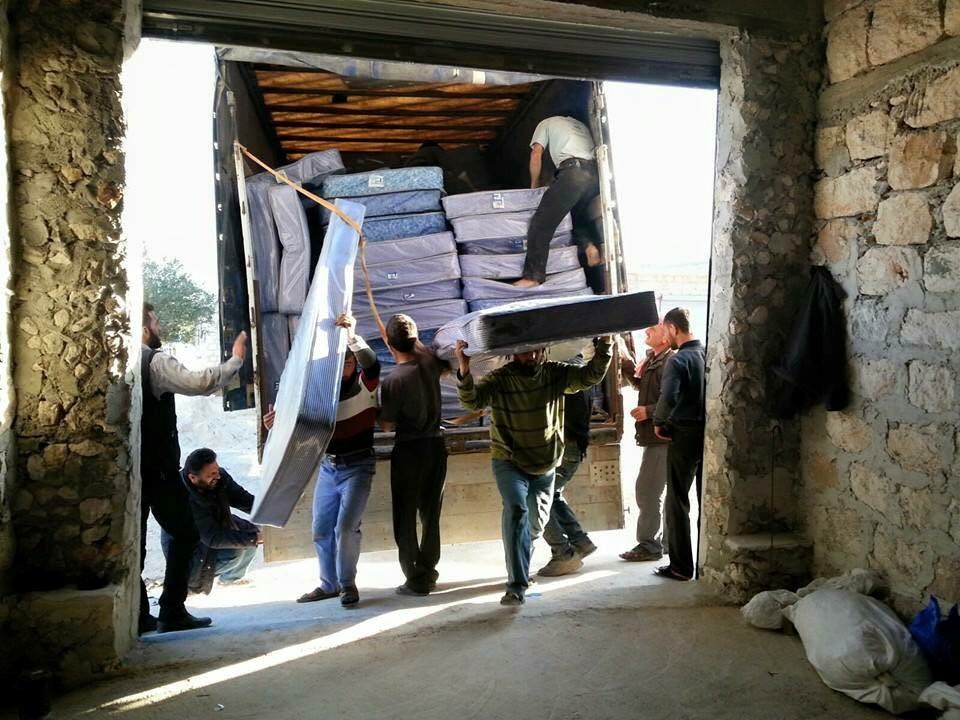 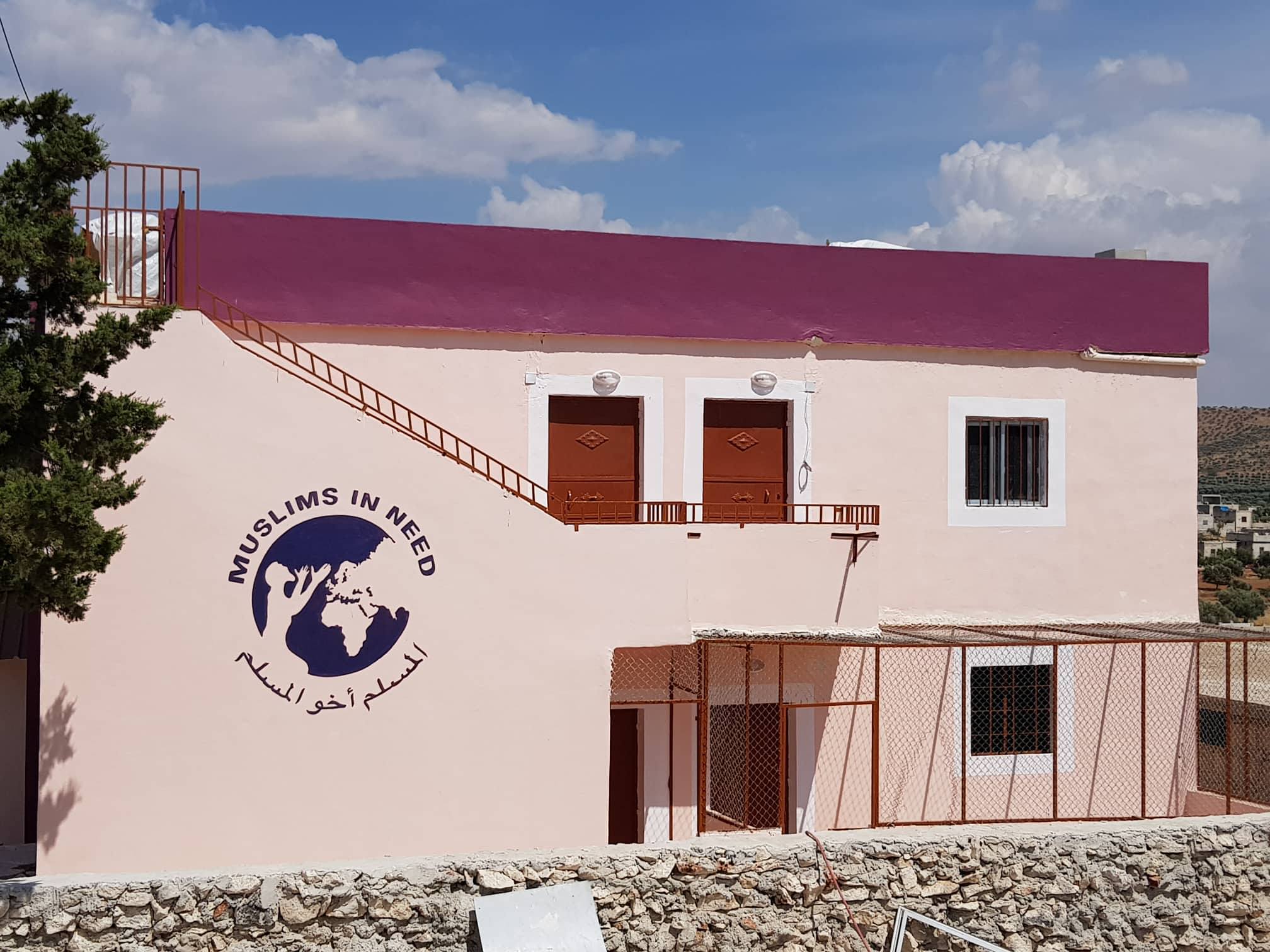 Women and young girls have had to endure atrocities that the rest of us couldn't even begin to imagine. Rape, torture, violence, homelessness, poverty, disfigurement and disability. With no-one to support them and no-one to help them overcome the atrocities they've experienced themselves and others they've witnessed, they are living their lives in a solitary and dark limbo suffering from Post Traumatic Stress Disorder (PTSD). OUR SISTERS are lonely, depressed, afraid, suicidal, poor and are left feeling hopeless. Muslims In Need has begun the undertaking of this project which is the first of it’s kind inside Syria. We aim to provide those most affected with depression, mental health issues and PTSD with the professional psychiatric and medical help they so desperately need. This will help them to regain their mental health and personal well-being in order to turn their lives around and overcome the devastating effects the war has had on their lives and the lives of those closest to them.

MiN is actively delivering much needed food parcels for families in East Ghouta, Khan Sheikhoun, rural Aleppo, Idlib and the Atimeh Refugee camp. These food parcels are a lifeline to many families who just don’t have the access or the means to obtain food. By giving an emergency food parcel you will be helping to feed a family for a whole month. Our food parcels are packed with essentials such as pulses and beans, rice, oil, flour as well as tinned vegetables and fish. 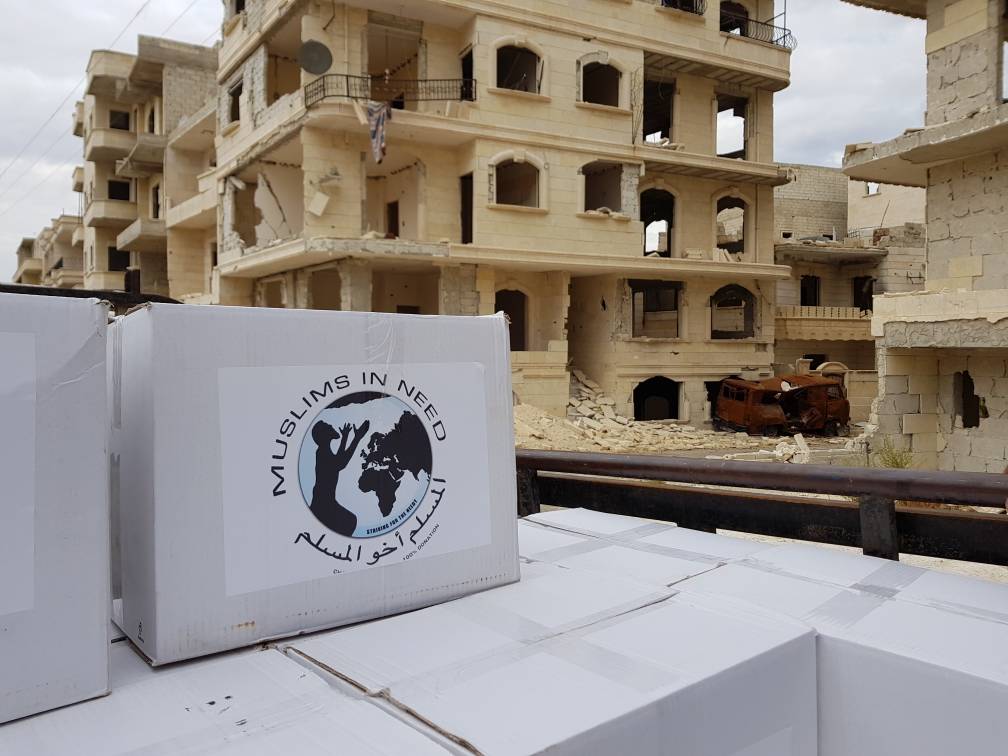 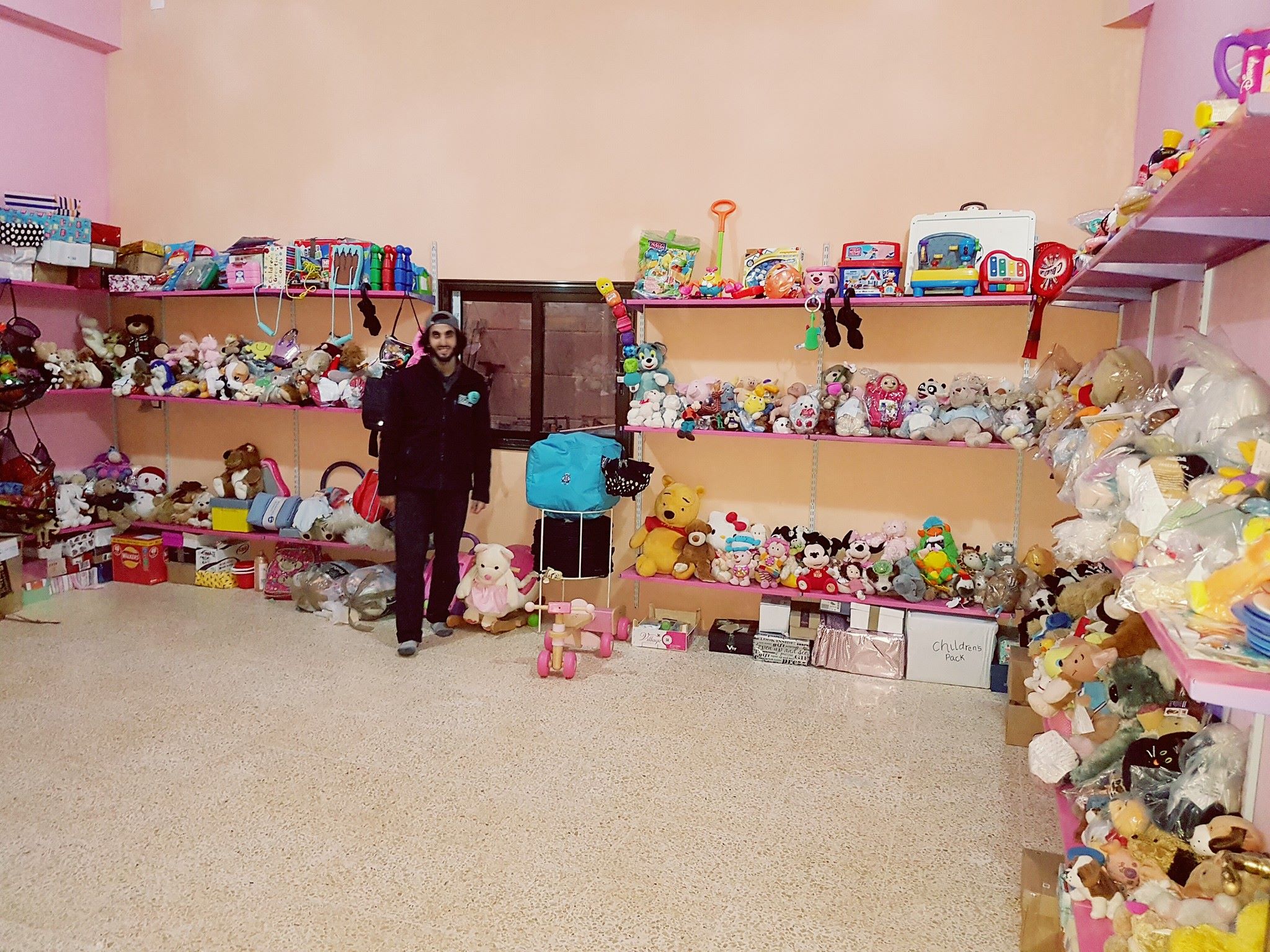 The One Solid Ummah orphan village also houses a free charity shop called “A Place of Happiness”. The shop is packed with toys, clothes, shoes, bags, school items and other essential items needed for children. The shop run a ticket based system allowing the children to ‘purchase’ their items in a dignified way to bring some normalcy back to their lives. The items in the shop are provided by the Container Projects along with general donations.

Gift a smille to a child for as little as £10

Our registered charity partners in Turkey are instrumental in facilitating containers into Syria from all over the U.K. With your donations, we can continue to cover the costs of getting these containers from the U.K. to where they are needed; inside Syria. These containers are stocked with donations from individuals, churches, mosques and even some schools. To date (April 2020), we have sent 120, 40ft containers packed with food, medical aid, clothes, shoes, blankets, even an x-ray machine, oxygenators and much, much more. 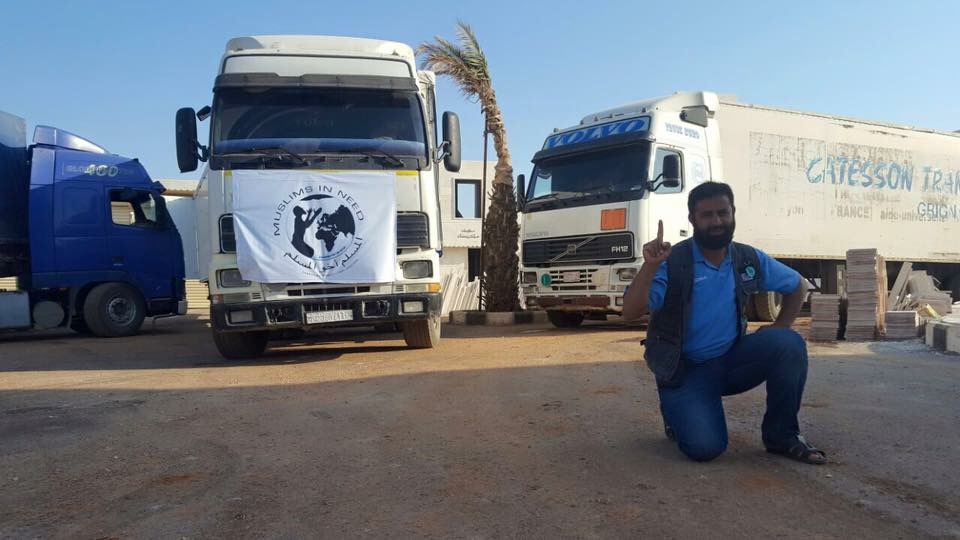 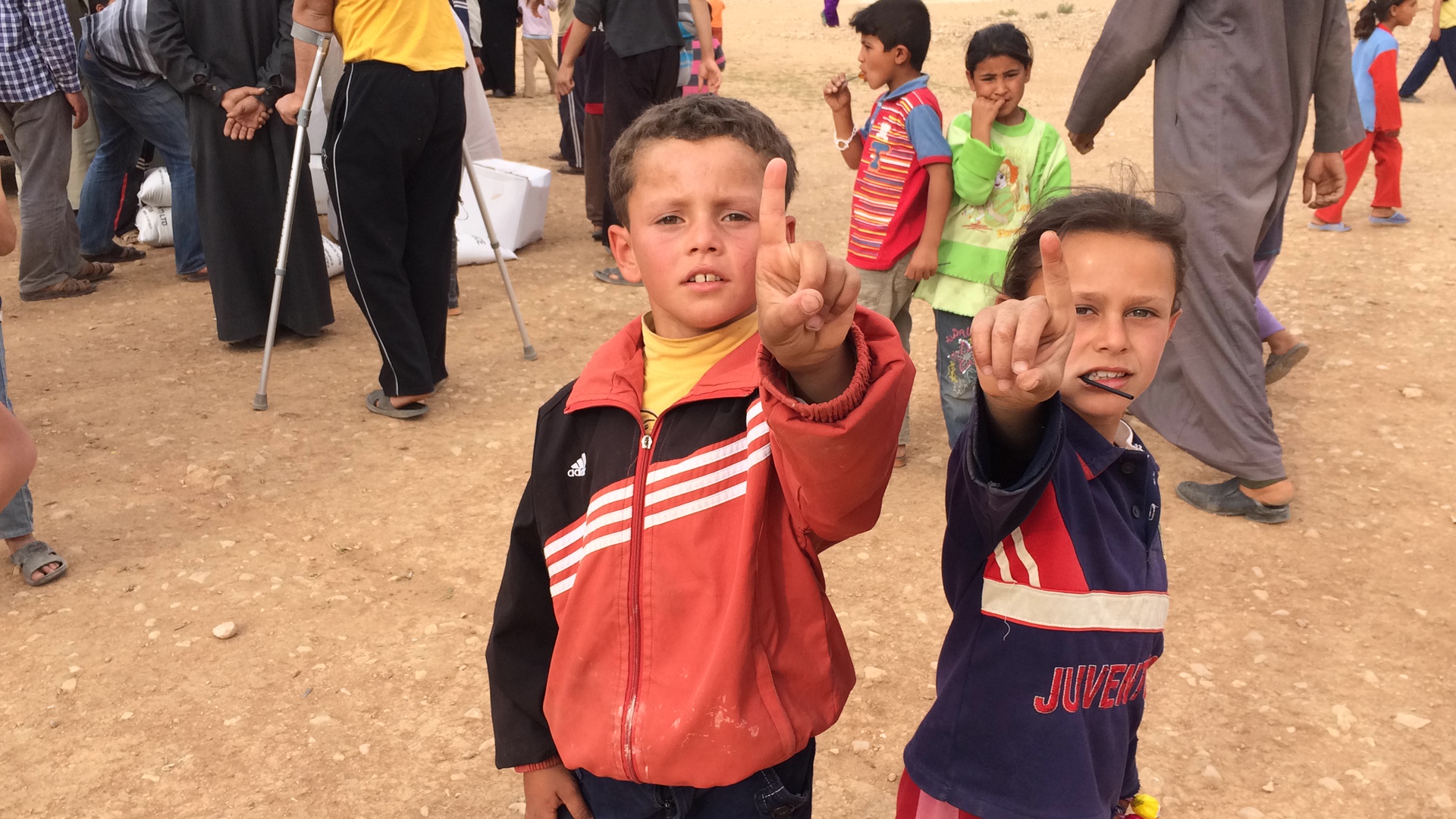 For as little as £20 a month you can sponsor an orphan inside Syria.
Your sponsorship will include accommodation, schooling, food, clothing and Islamic education.
Donate Now